Italeri is launching  the M1120 HEMTT Load Handling System. The kit is a rebox of the M977 (1996) with new sprue parts, wheels and decals. This was a most expected kit, since they already have the Tanker (M978), and the gun truck.

The acronym HEMTT (Heavy Expanded Mobility Tactical Truck) is for a eight-wheel drive off-road capable heavy truck, produced from the mid-80s for the United States Army. Thanks to its features, the HEMTT is able to guarantee a great off-road mobility and significant transportation performance. It has become the real “workhorse” of the Army capable of carrying ammunition and equipment in a very effective way. In details the M1120 HEMTT LHS (Load Handling System) is equipped with a loading system, that can be used direct from the cabin, able to transport a lot of different types of cargo and containers. The M1120 is capable of carrying a payload of 11 tons. That’s make it ideal to perform military logistic duties. It has been recently used in operative area as Iraq and Afghanistan.

This new release from MMK Models comes complete with a full interior and several frets of photo etch details including one colour fret and some very nicely detailed screens to protect the driver.

The kit can be purchased from VT-models.cz, please follow this link:

> Wheel hubs are in great details

The acronym HEMTT (Heavy Expanded Mobility Tactical Truck) identifies a range eight-wheel drive off-road capable heavy truck, produced from the mid-80s for the United States Army. Thanks to its features, the HEMTT is able to guarantee a great off-road mobility and significant transportation performance. It has become the real “workhorse” of the Army capable of carrying ammunition and equipment in a very effective way. In a lot of conflicts, as in Iraq and Afghanistan, it has been often modified by the field workshops, on the specific requirements of the crews, in order to be more and more effective in the hard operating environments, Furthermore some HEMTT versions have been modified to be used in escort and convoys protection duties. Some additional protections and defensive weapons have been add on.

After looking from the original HEMTT Truck and the sprue of this one they look like a mix of other models,(M923 and M925 kits)  with some  added parts for the armored box, another .50 cal, and the gunshield and mount for the rear .50 cal, all added onto the wheel sprue from their M923A1 kit (below). It also has some basic parts for the wheels to make it an M923A2 (w/CTIS) truck.

Here is a new addition from Black Dog for modern soldiers theme. The set consists of 4 figures and a "throwbot". The tactical robot system can be directed by the operator to quietly move through a structure and transmit video and audio stream to the control unit. 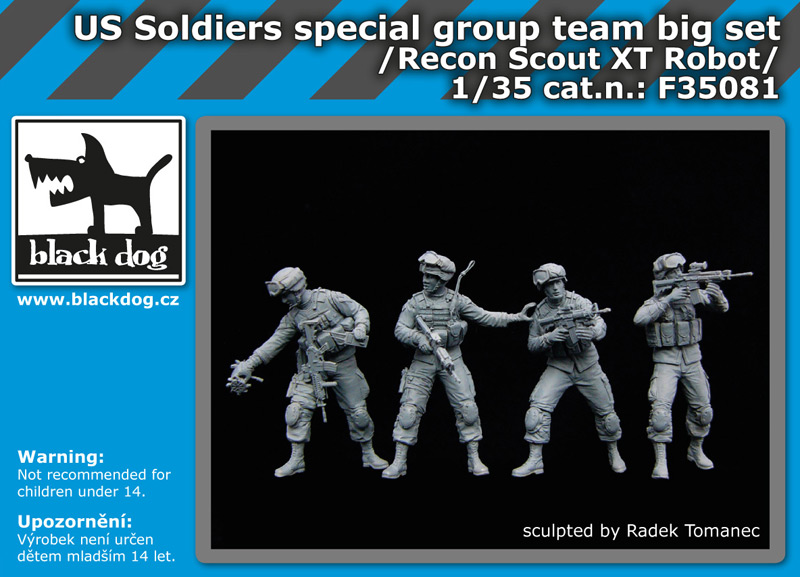 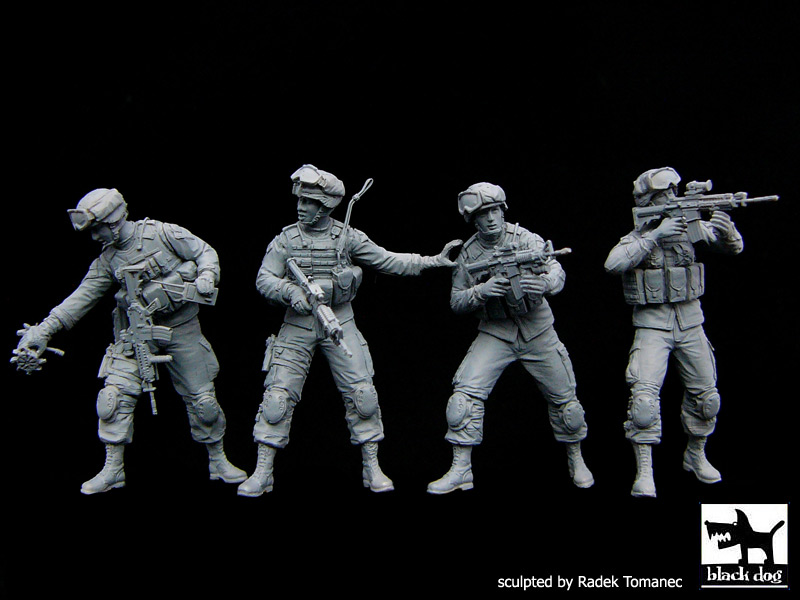 Thanks to Eric Aitala, webmaster of IPMSUSA for sharing this fantastic Review of the M-ATV Vehicle. This is Kinetic Models’ first armor kit, a 1/35 replica of the M-ATV (MRAP-All Terrain Vehicle).  The M-ATV was first developed by Oshkosh in 2009 in response to the U.S. Military’s urgent request for a HUMMV replacement.  It was designed to provide an equal level of protection as larger MRAPs, yet possess extreme mobility and durability to meet the treacherous terrain conditions in Afghanistan.  Included in the top-opening box are 11 tan plastic sprues, 1 sprue with clear parts, 1 PE fret, 1 sprue of vinyl parts, 5 vinyl tires, 1 small decal sheet, and a 32-page instruction sheet that includes a sprue map, painting guide,30 building steps, decal guide, and two pages of black & white detail photos.

This is Kinetic Models’ first armor kit, a 1/35 replica of the M-ATV (MRAP-All Terrain Vehicle).  The M-ATV was first developed by Oshkosh in 2009 in response to the U.S. Military’s urgent request for a HUMMV replacement.  It was designed to provide an equal level of protection as larger MRAPs, yet possess extreme mobility and durability to meet the treacherous terrain conditions in Afghanistan.  Included in the top-opening box are 11 tan plastic sprues, 1 sprue with clear parts, 1 PE fret, 1 sprue of vinyl parts, 5 vinyl tires, 1 small decal sheet, and a 32-page instruction sheet that includes a sprue map, painting guide,30 building steps, decal guide, and two pages of black & white detail photos.

The kit contains over 500 parts, of which just a few suspension parts are duplicates.  The detail of the parts is good, but there is flash on many parts and some mold shift is evident.  The kit provides optional parts for both an M2 .50 cal and Mk-19 AGL, armored turret with roof, and Rhino counter-IED device.  The tires are vinyl.  I tried to age the tires by sanding; however, the vinyl is too hard.  Painting is probably your best choice.

The instructions are in book form and are laid out logically.  Carefully review the instructions, as there are numerous errors in numbering of parts and locations for left/right handed parts.  Despite those issues, the instructions do include many detail boxes showing construction sub-steps to help the process.

Steps 10 & 11 cover the construction of the frame and the attachment of the suspension boxes.  The rail frame with cross-pieces comes as one part, ensuring the frame remains square; however, the front and rear end pieces are separate, complicating construction.  I highly recommend delaying attachment of small items to the front and rear bumpers until the end of construction.  The glad-hand hydraulic fittings are mismarked as parts C-21 in the instructions.  They are actually marked on the sprues as part G-21.

Assembly of the under-body armor and the crew compartment takes the next nine steps.  The tie down fittings located at the four corners of the underbody armor are also misidentified as parts F6 & F9.  They should read as C6 & C9, respectively.  Test-fit the step frames attached to the underbody armor so that they hang properly to ensure the tops of the step plates are parallel to the ground.  Take your time when building the seats, as the gluing surfaces are small and the seats can be fragile.  The decals for the instrument panel add some color to the interior but will not be visible unless you leave the driver door open.

When building the four doors, test-fit the windows.  The windows for each pair of doors (front and rear) are marked with same part numbers.  However, the windows have a beveled edge and are handed.  If the bevel in facing the door, the windows will mount flush to the frame.  If reversed, they will stand proud of the front, which in incorrect.  If you are to mount the doors closed, I recommend your add them before you build the crew compartment.  The fit is very tight and I needed to press on both inside and outside surfaces to get them to seat flush with the sides of the crew box.

The final two steps involve building the turret, weapons, and Rhino device.  Included with the turret is an armored roof.  Both the turret roof and Rhino device are optional.  You have a choice of an M2HB .50 cal machine gun or an Mk19 grenade launcher.  I tried to build the M2HB, but the cooling jacket at the front of the receiver group is just too fragile and the cooling holes were filled with flash. The method used by Kinetic to attach the weapon cradle to the weapon mount did not provide a firm attachment for the unbalanced weapons.  I recommend cutting the partial pins off of the cradle and mount, drilling holes in each, and adding a metal pin to the cradle, just as with the real thing.  I did not have enough room inside the turret to mount the ammo can next to the Mk19.  Most likely it was my error and a lack of patience as the end neared. The armored glass fitted easily to the turret and gun shield with white glue.  The glass panes have a frame etched on one side, simplifying painting.

The final construction step has you adding the tires and wheels. I decided to add them after mounting the hood, crew compartment, and cargo box.  I then followed with the antennae frame, roof mounted lights, antennas, and the turret.  One note: the front wheels can be posed if you are careful when constructing the front suspension box.

The PE fret is small, but I think Kinetic’s choice of parts was excellent.  The parts consist of the hood grill, two small interior parts, the frames around the lids of the two rear stowage boxes, and the latches securing the lids.  With the exception of the two interior parts, the PE is highly visible and adds finesse to the overall appearance of the vehicle.

I recommend that you paint as you build.  Many of the parts have multiple contact points/edges, often on both sides of the parts.

Currently, you have one choice for camouflage, a CARC paint that is a yellow sand color.  The kit instructions list the color as FS33446, which when compared to the vehicle I based my build upon, is too tan. I used Model Master Spray Enamel, FS33722, Modern Desert Sand, which is a perfect match to the vehicles at Ft. Bliss, TX. The only parts that are not desert sand are the seat cushions, hood grill, Rhino device, weapons, lights, some interior fittings, and tires.  The wheels can be either sand or black, based on the vehicle you’re modeling.  I painted the satellite antennae, BFT antennae, and GPS antennae black, off-white, and green, respectfully, to add some color, based on photos I have taken.  Again, refer to your references as I have viewed all three antennae in sand color.

Weathering on the vehicles at Ft. Bliss is very light.  The CARC paint is factory-applied and is a tough coating, and the vehicles are only a couple years old.  The most common weathering I have observed is grease stains to the suspension and drive train, exhaust stains behind the tail pipe, and sand-based mud common during the rainy season on Ft. Bliss and White Sand Missile Range.

The decals printed by Cartograf are thin and adhered to the base paint coat with no special preparation and a follow-on drop of Micro Set.  The decals consist of maintenance warnings, vehicle USA numbers, and instrument dials.  They provide a choice of two vehicles.

Overall, the kit looks like the M-ATVs I have seen.  The detail is more than sufficient to build a realistic replica.  The one interior item I wish had been included with the kit is the five-point seat restraint systems which can be viewed through the windshields.

The M-ATV is a large vehicle and begs to be detailed.  My build was out-of-the-box except for replacing the vinyl hydraulic lines.  The most visible items to be added are radio antennas, interior and external cabling, plumbing for the crew compartment fire extinguisher, and the straps securing the crew seats to the ceiling.

The Kinetic M-ATV builds, with patience, into an excellent replica of the prototype.  It is not a kit for a first-time builder, but anyone with experience building wheeled armored fighting vehicles or detailed civilian race car kits should have minimal issues.

I would like to thank Kinetic Model Kits and Stevens International for this review kit, and IPMS/USA for the opportunity to review it.